Horseback UK, a Scottish charity that uses horsemanship to inspire recovery, regain self-esteem and provide a sense of purpose and community to the wounded injured and sick of the military community is at the centre of a national year-long fundraising campaign “We Remember Them”.

The name of the campaign is inspired by the Laurence Binyon Poem “They Shall Grow Not Old”:

“They shall grow not old, as we that are left grow old:

Age shall not weary them, nor the years condemn.

At the going down of the sun and in the morning

We will remember them.”

On 11 November 2018, the First World War centenary remembrance will mark 100 years since the end of the Great War.

Two old friends, Deane Hitchens-Orr (a former Royal Marines officer) and Simon Wright are the driving force behind We Remember Them, a nationwide campaign to raise funds for two charities: Horseback UK and the Royal British Legion.  “On Remembrance Day 2018 we will remember the one million British serving men, women and civilians who gave their lives in the Great War – along with the hundreds of thousands who were seriously injured. We want people from all over the country to do something extraordinary to remember those who endured something extraordinary for us and raise money for these two amazing charities that support past and present members of our Armed Forces” said Deane.

They go on to say: “Our extraordinary challenge is to complete an Everesting bike ride – which involves continuously cycling 40 times up and down Froggatt hill in Derbyshire to reach an accumulative altitude gain of 8848m – the height of mount Everest.  Given that we have never really rode before we have given ourselves a year to train. The challenge will take 24+ hours and allows for rest but not sleep. As we go about training for the challenge, we have seen an amazing amount of interest from numerous others and have decided to expand the initiative.”

Deane and Simon have now set up a website where anyone who wishes to participate and contribute can sign up and share their challenge commitment: http://www.werememberthem.org.uk/ The challenges can be as varied as possible; they don’t have to be physical, but can involve learning a new skill such as a language or a musical instrument or completing a project – as long as it is extraordinary for the people doing it and completed by 11 November 2018. Groups, communities and companies are welcome to join.

We Remember Them launches on Remembrance Day, 11th November 2017 and will continue until 11th of November 2018. It will finish with a small remembrance ceremony at the National Memorial Arboretum in Staffordshire.

Many have already joined the campaign, including 21-year-old Shauney Watson from Angus, Scotland, just two marathons’ distance away from where Horseback UK is based in Aberdeenshire.

Shauney is doing the Everest Marathon this year – the highest marathon in the world listed in the Guinness Book of Records. The challenge includes a trek to base camp, several acclimatisation climbs and finally a marathon run back in extreme conditions. In preparation for this, she has been completing ultra-marathons, mountain races and other challenges.

A new member to the team 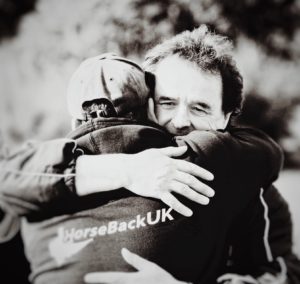 a feeling of ‘blah’

Call US
Email Us
Find Us
Menu